Book a table
Become a member
Hire the club 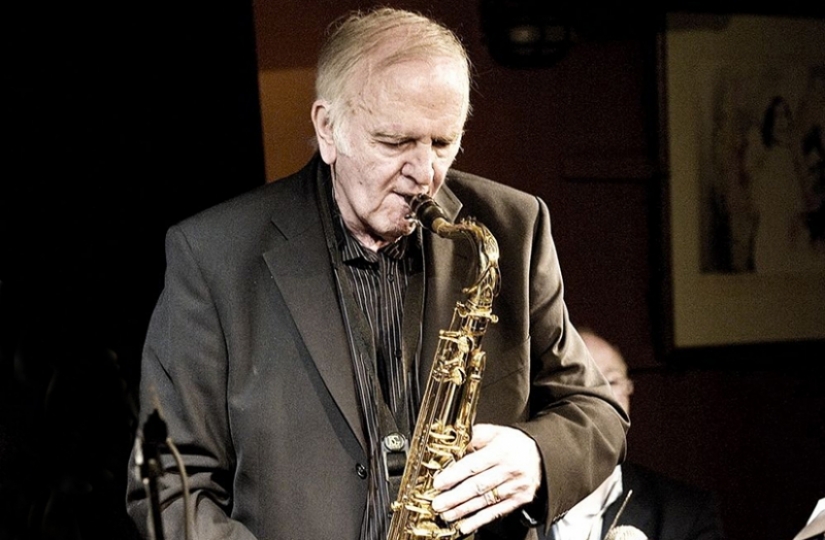 Scottish saxophonist and composer Duncan Lamont was one of Britain’s most venerated musicians, having performed both live and in the studios with the likes of Henry Mancini, Benny Goodman, Frank Sinatra, Bing Crosby and Count Basie. He was also one of the UK’s most important contemporary songwriters, with songs recorded by some of the finest singers in the World including Cleo Laine, Norma Winstone and Natalie Cole. In addition to all of that, he was commissioned to write or arrange countless orchestral pieces and most importantly of all…he wrote the theme tunes to children’s TV series Mr Benn and Spot!

Sadly Duncan passed away last year shortly after celebrating his 88th birthday with us here at the Club, and so on Monday 24 February we will be honouring his memory in the company of some of the finest musicians on the UK scene - five singers and 18 musicians in all! Duncan's son Duncan Junior, also a saxophonist and bandleader, will be master of ceremonies and has kindly given us the set list in advance, along with his notes which detail the history and origin of the compositions. They are so delightful we wanted to share them prior to the performance, so here they are:

1.  More Brothers (One of Duncan’s first compositions written in the early 50s. When it was published in the 1990s, it became part of the saxophone syllabus for Trinity and ABRSM exams and has been performed by students all over the world. It was written as a tribute to one of Duncan’s musical heroes, Jimmy Giuffre. This big band version was written four years ago).
2.  Mr Benn (Duncan wrote this as the theme tune for a BBC animated children’s TV series which ran for many years, eventually becoming an iconic show and cult in its own right. It was used as part of an advertising campaign for an insurance company only last year. In 2010, Duncan went back into the studio 40 years after the original broadcast with new big band arrangements based on the original score).
3.  The Balloonist (Another theme from “Mr Benn” written for a BBC Jazz Club broadcast. This became a favourite of many musicians who played in Duncan’s band during the many years he ran a regular charity gig at the Bull’s Head in Barnes).
4.  I Told You So (Out of the many songs written by Duncan, this has been the most frequently recorded by the likes of Blossom Dearie, Natalie Cole, Cleo Laine and last year by Clare Martin. Tonight it’s sung by Esther Bennett who for many years was the prime mover behind the Duncan Lamont Songbook project which gigged all over the country, most notably at the 606).
5.  Bob Brookmeyer (Duncan was commissioned by a classical trombone quartet to write a series of portraits of the great Jazz trombonists from Kid Ory to Bill Watrous. When Duncan made his first trip to New York with the Vic Lewis Orchestra, he got to meet Bob Brookmeyer who took him under his wing and showed him the jazz hotspots. Duncan considered Bob one of the finest improvisors and arrangers in the business. This is a feature for the four trombones plus rhythm section).
6.  A Scandal In Bohemia (Duncan was commissioned to write a suite for the City Of London to commerate the first appearance of Sherlock Holmes in “The Strand” magazine. For the concert, Spike Milligan was the narrator, playing all the characters in his unique manner. This piece has the same title as one of the short stories concerning Irene Adler, the only woman to ever outwit Sherlock Holmes, earning both his admiration and possibly romantic interest…).
7.  The Big Cat (In the 1970s, Duncan began writing library music for a company called KPM. Library music was music that could be hired “off the shelf” for film,TV and radio. A lot of the time the writers were required to pastiche whatever the latest trends were. In this case, the piece is in the style of Henry Mancini. Duncan recorded several times with Mancini whom he admired greatly, especially for the great songs he wrote).
8.   A Great Day In Harlem (Duncan’s song is a tribute to a day in 1958 when all the jazz greats of New York gathered together in the street for a legendary photo published in Esquire magazine. The song highlights several of them and is sung by Sarah Moule, Daniela Clynes and Esther Bennett).
9.    52nd Street (A song that celebrates the street that was the hub of Jazz life. This was inspired by a walk taken in the company of his good friend, film composer and song writer, Johnny Mandel, who was remembering all the 52nd Street jazz clubs in its heyday).
10. Buttons (This composition was written for a jazz pantomime based on “Cinderella”, Buttons being her best friend. Originally a trumpet feature for Eddie Blair, Duncan later added lyrics and it was retitled “Fred Astaire” as a tribute to the Hollywood legend whom he recorded with in the 1970s. The song found its way to Astaire who sent Duncan a letter saying how much he enjoyed the song).
11.  The Saxes (Duncan wrote a suite, “The Young Person’s Guide To The Jazz Orchestra” which was a parallel piece to Benjamin Britten’s orchestral masterpiece. Like Britten, all the music was based on a piece composed by Henry Purcell in the 17th Century. The Saxes is the opening variation for the saxophone section).
12.   Costa Plenty (In 1968 Duncan was asked to record a Latin American album under his own name. This was the opening track).
13.  Othello (In the 1960s, Duncan was a member of the Johnny Scott Quintet. Apart from himself on tenor sax and bass clarinet, John played alto sax and flute, Barry Morgan was on drums, Arthur Watts on bass and David Snell was that highly unusual specimen, a jazz harpist. Reflecting the chamber music sensibility of the period, Duncan contributed this composition to the band’s library).

For more information and booking, go to /events/view/celebrating-duncan-lamont/