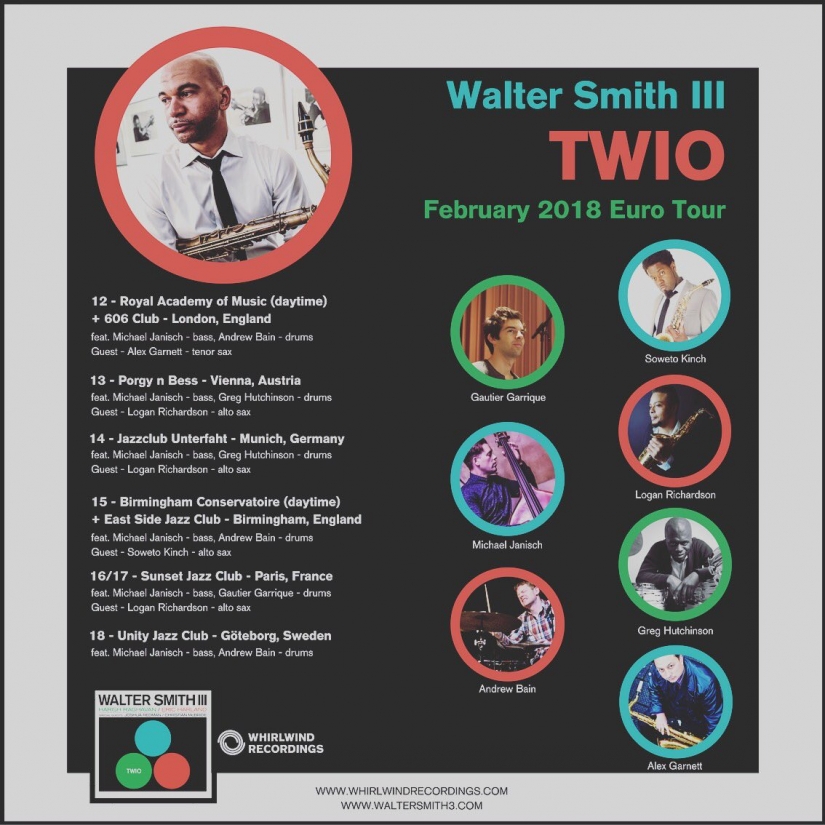 Presented in association with UK contemporary jazz label Whirlwind Recordings, acclaimed US saxophonist Walter Smith III will be making his 606 debut as part of the Euro Launch tour for his latest album, “TWIO”.  Recognized as one of the greatest saxophonists of his generation, Walter has played with the likes of Mulgrew Miller, Billy Childs, Joe Lovano, Herbie Hancock, Dee Dee Bridgewater, Terri Lynne Carrington, Bill Stewart and Ralph Peterson, and has been a member of several legendary American contemporary jazz groups, including Roy Haynes Fountain of Youth Band, Terence Blanchard Quintet, Eric Harland's "Voyager", Ambrose Akinmusire Quintet and the Christian McBride "Situation" to name just a few. To date, he has appeared on over 100 recordings and performed at prominent venues such as Carnegie Hall and the Kennedy Center. To provide further context, such is his formidable reputation that American jazz superstars Josh Redman and Christian McBride guested on Walter’s latest recording! A graduate of Berklee College of Music and the Thelonious Monk Institute of Jazz (where he earned his Master’s degree), Walter showed early promise when he was awarded the Clifford Brown/Stan Getz Fellowship from the International Association for Jazz Education (IAJE) while still in high school, amongst many other distinguished awards and scholarships. Stylistically, his range is vast, yet there is a timeless quality to his sound that makes it accessible to any jazz fan. For this 606 show, Walter will have three of the UK’s premier jazz players on side: bass virtuoso (& Whirlwind label head) Michael Janisch, drummer Andrew Bain and special guest, Ronnie Scott All-Star ace, saxophonist Alex Garnett. Again, this is the only London date on the tour so don’t miss the opportunity to see this extraordinary artist performing with this outstanding band.

“uses some of that mid-’60s Miles strategy, and the best of it - is fabulous” New York Times; “... consistently emerging as an identifiable voice among the masses.” All About Jazz; "Smith is casually mentioned in the same breath as other modern saxophone greats like Joshua Redman, Chris Potter and Mark Turner" LA Weekly