“Tracey...one of the most impressive jazz drummers in Britain today”

Originally featured with the band of his late, great, father Stan, Clark Tracey has gone on to establish himself in his own right as one of the country’s leading modern jazz drummers. He has recorded over 90 albums (9 as a leader), has performed in over 50 countries and has been awarded the "Best Drums" title five times in the British Jazz Awards. Tonight, for this LJF Special, Clark will be celebrating 40 Years as a professional Jazz Musician, having done his first paid gig with Stan, on August 28th 1978 (he was very specific!). Since then, as well as working in Stan's various bands, Clark's own highly impressive ensembles have become leading lights on the UK Jazz scene. In particular Clark has focused on bringing through some of the most talented younger musicians the UK has produced, which has led to his alumni reading like a who's who of UK jazz, including the likes of Nigel Hitchcock, Dave O'Higgins, Mornington Lockett and Zoe Rahman, through to his most recent lineups featuring 18 year old Young Jazz Musician of the Year Alex Ridout and 17 year old saxophonist Sean Payne. It's no surprise therefore that tonight Clark has invited a phenomenal frontline that reflects his many years as a bandleader and performer, including ECM recording artist, saxophonist Iain Ballamy, leader of his own bands Anorak & Quercus and a member of Loose Tubes; saxophonist Simon Allen, who worked in the bands of both Clark & Stan and is now a well respected player and educationalist; the aforementioned Sean Payne from Clark's current band; trumpeter Mark Armstrong, the Musical Director of the acclaimed National Youth Jazz Orchestra and, a simply superb rhythm section featuring pianist Gareth Williams and bassist Arnie Somogyi. Somewhat fittingly however Clark's special guest will be the saxophonist who was there, performing on his first ever gig as a professional musician, the iconic Art Themen. As ever though, the driving force behind the night’s entertainment will of course be Clark himself, bringing a rhythmic diversity, taste and sensitivity that has made him one of the UK’s most respected musicians.

“Tracey...one of the most impressive jazz drummers in Britain today” The Times; " the variety and quality of the soloing all through this set is a tribute both to Tracey's vision and to the resourcefulness of the contemporary UK jazz scene" Guardian 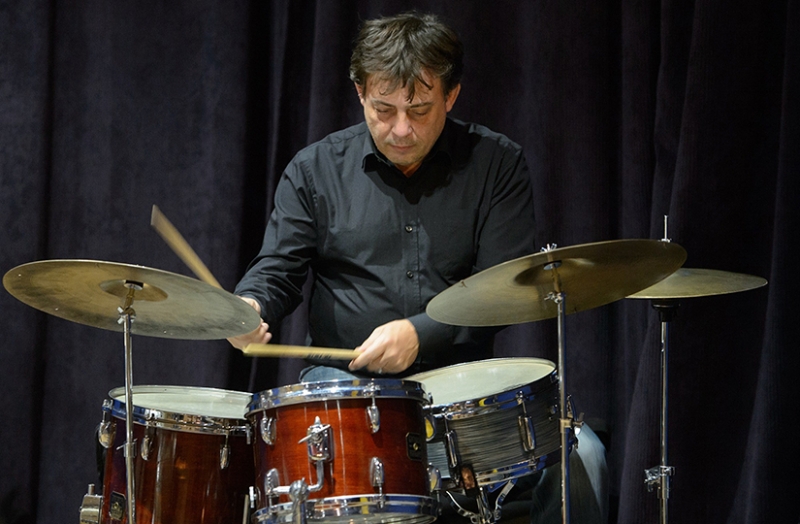