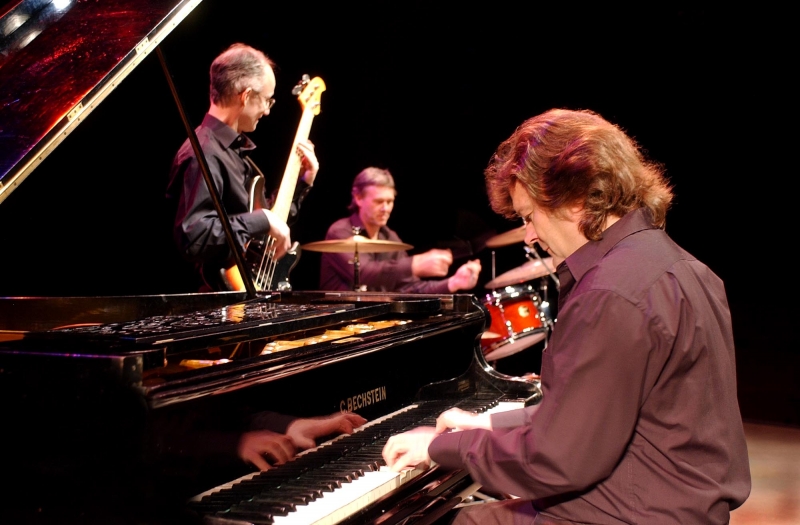 This is a fascinating trio led by pianist David Rees-Williams that successfully blends the traditions of classical music and jazz. He formed his first trio shortly after moving to Canterbury in the mid 80's and by 1988 the David Rees-Williams Trio of David, Neil Francis on bass guitar and Phil Laslett on drums was formed. Through the 90's David and the trio developed a unique and versatile style, playing sophisticated modern jazz explorations of classical music from the last four centuries. The trio became something of an "overnight" success when, in 2001, a track from their first album "Classically Minded" was played on Radio 3. The response was significant and led to the trio being invited to record a CD for the BBC, "Hidden Colours", which was released in May 2002, receiving 4-star reviews in The Times and The Independent On Sunday amongst many other plaudits. Since then David and the trio have released a further 6 CDs, music on the various albums featuring composers such as Ravel, Bach, Chopin, Purcell, Elgar, Mozart and Debussy and they have continued to receive rave 4 star reviews from the likes of The Sunday Times, The Independent On Sunday, Jazzwise Magazine, BBC Radio 3, Classic FM and the Arts Desk. The trio’s latest offering, "Classically Re-Minded" features mainly the work of J S Bach and was given a place in the Sunday Times top 100 albums of the year in December 2017. The concert this evening promises to be quite special, incorporating material from the world of the classics parcelled in a fresh and authentic jazz style from a trio that have been performing together now for more than 30 years.

"The David Rees-Williams Trio have just got better and better…their new recording of jazz forays into the classical repertoire is just magical" Guardian; "David Rees-Williams’ rendition of Purcell’s ‘When I am laid in earth’ literally stole my breath….the trio far outstrips anything [similar]...they are on another plane and deserve huge recognition"  Evening Standard; "Rees-Williams is an improviser with a voice of his own" The Times