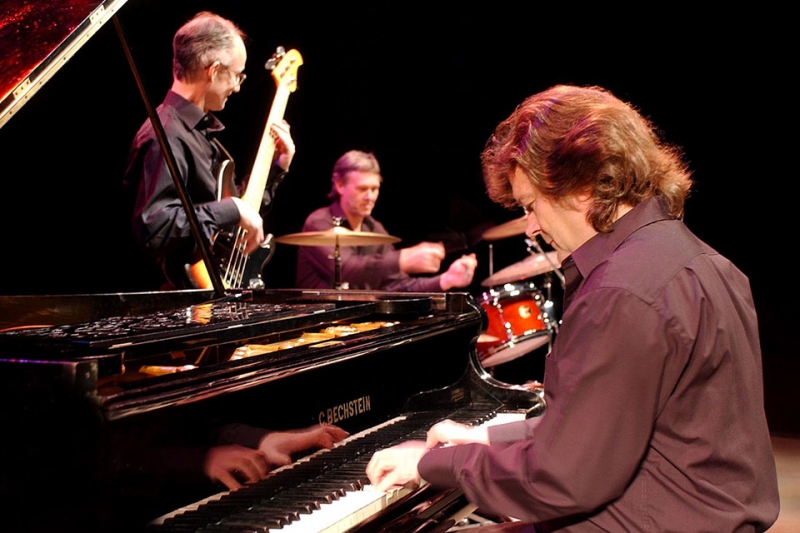 The David Rees-Williams Trio of David on piano, Neil Francis on bass guitar and Phil Laslett on drums was formed in 1988, and through the 90's they developed a unique and versatile style, playing sophisticated modern jazz explorations of classical music from the last four centuries. The trio became something of an "overnight" success when, in 2001, a track from their first album "Classically Minded" was played on Radio 3. The response was significant and led to an invitation to record a CD for the BBC, "Hidden Colours", receiving 4-star reviews in The Times and The Independent On Sunday amongst many other plaudits. Since then David and the trio have released a further six CDs, music on the various albums featuring composers such as Ravel, Bach, Chopin, Purcell, Elgar, Mozart and Debussy and they have continued to receive rave 4 star reviews from the likes of The Sunday Times, The Independent On Sunday, Jazzwise Magazine, BBC Radio 3 and the Arts Desk. Their latest offering, "Classically Re-Minded" was given a place in the Sunday Times top 100 albums of the year. Although taking his inspiration primarily from the classical canon, David's jazz playing is fluent and authentic, being best described as "Jacques Loussier meets Dudley Moore!". The concert this evening promises to be quite special, as it will not only feature music from David and the trio, but through the evening David will also be entertaining the audience with his witty, wry and informative anecdotes from his vast knowledge of both classical music and jazz. This promises to be a great night from a trio that have been performing together now for more than 30 years.

"The David Rees-Williams Trio…is just magical" Guardian; "….the trio far outstrips anything [similar]...they…deserve huge recognition" Evening Standard; "Rees-Williams is an improviser with a voice of his own" The Times