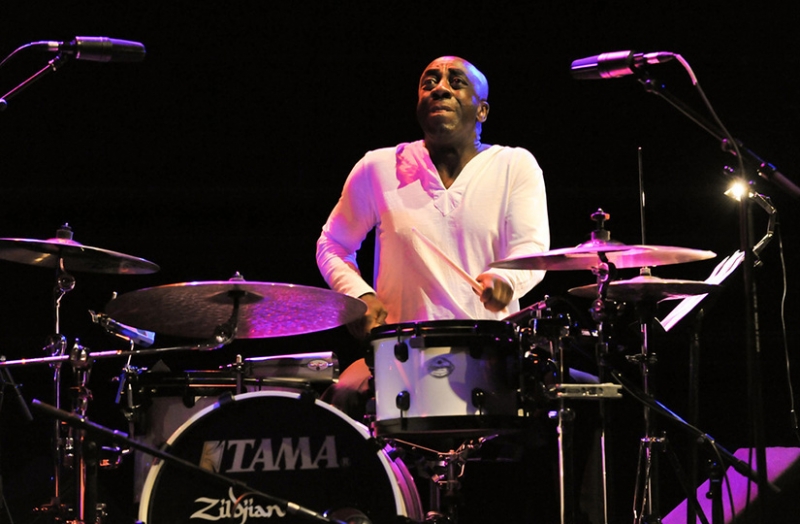 Over the last 30 years Frank Tontoh has established himself as a drummer of considerable accomplishment, playing in a wide variety of high profile settings that have cemented his enviable reputation as one of the finest players around. He first toured in 1982 with his father, Mac Tontoh's, band Osibisa before returning to London in 1986 where, along with Courtney Pine he formed the iconic Jazz Warriors. After moving on to his own highly regarded band, Desperately Seeking Fusion, he was soon first call for numerous high profile artists and since then has established himself as a major player. His cv is immense, including the work with the likes of Craig David, Aztec Camera, Jack Bruce, Matt Bianco, Al Green, Level 42, George Michael and Gary Barlow as well as recording and touring with the late Amy Winehouse (“Back to Black” tour). An old friend of the Club it’s with great pleasure that we welcome him tonight for the fifth year of celebrating his birthday with us, (we’re not saying how old he is…but Google never lies). The musicians supporting Frank tonight, as you would expect are simply outstanding, including noted soul singer and multi-instrumentalist Lex Cameron (Roachford, Leon Ware & Music Director for Omar) and guitarist Tony Remy (Courtney Pine, Pee Wee Ellis). To add even more glitter – if there wasn’t enough! - Frank has also lined up a host of serious Special Guest singers and if Frank’s previous gigs here are anything to go by, you can expect plenty of amazing Surprise Guests as well. This promises to be another brilliant evening of powerful soul and funk grooves - booking strongly advised!