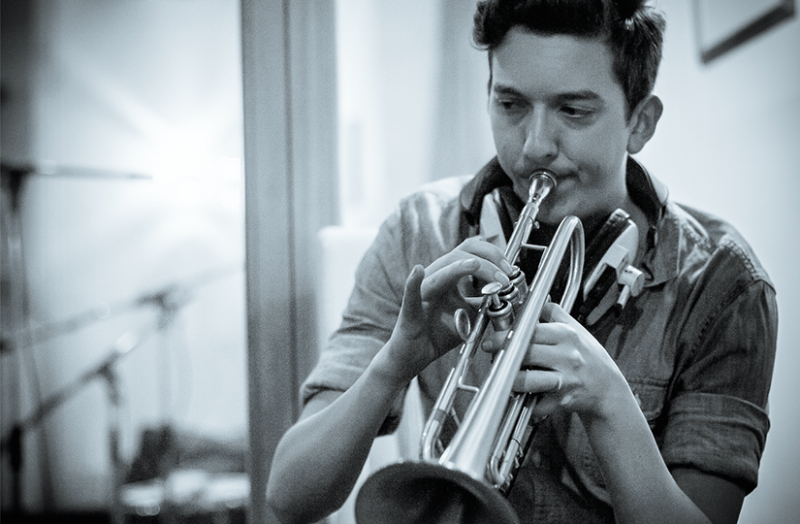 A graduate of the Royal Academy of Music and the National Youth Jazz Orchestra, Freddie Gavita is establishing an impressive reputation as one of the top trumpeters on the UK jazz scene. First attracting notice as a soloist with the BBC Big Band with whom he appeared twice at the BBC Proms, Freddie has gone on to work with an enviable array of high profile artists including Jon Hendricks, Gregory Porter, Curtis Stigers, Paloma Faith and the Ronnie Scott’s All Stars. Winning the British Jazz Award for ‘Best Trumpet’ in 2017, Freddie released his debut album as leader “Transient” that same year, music from which you’ll be hearing tonight. Stylistically, Freddie cites influences from Louis Armstrong to Clifford Brown, Freddie Hubbard and Miles, and one can hear echoes of all of these greats in his approach. Freddie himself describes his music as “aimed at the heart, not the head” while All about Jazz, commenting in its glowing review said Freddie is a “prodigious talent, both in terms of his playing and composing … his star is most definitely in the ascendancy”. Also featured in the quartet is Freddie’s long time collaborator, the internationally acclaimed Award winning keyboard player Tom Cawley (Peter Gabriel, Acoustic Ladyland). This is a virtuoso lineup with a deep love of jazz and highly recommended.

“A talented trumpet prodigy” The Guardian; “Clearly one to watch” Daily Telegraph; “Freddie’s tone ranges from the warmly conversational to the eloquently strident” The JazzMann; “Cawley…excellent, fluid, pianist with a deft touch and a superb improviser’s imagination.” Time Magazine