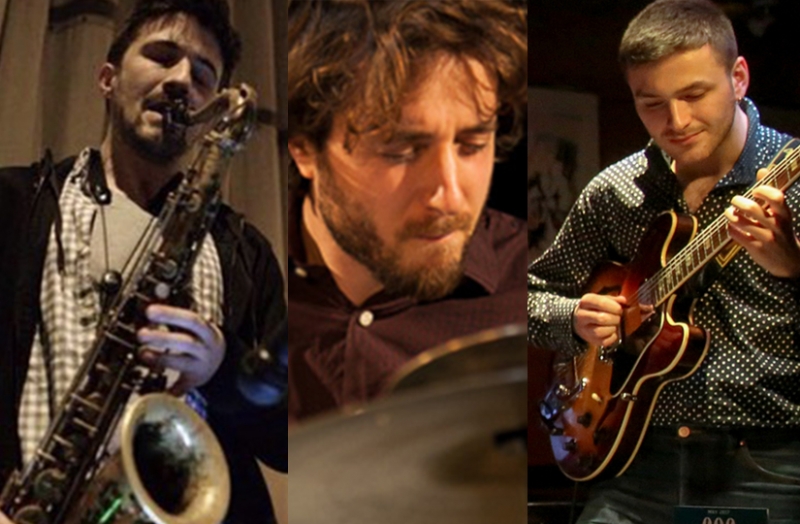 Playing ‘melodic, forward-thinking jazz and improvised music’ this Trio features three spectacularly talented UK musicians: George Crowley, Rob Luft & Tim Giles. Saxophone and clarinet player/composer George Crowley released two acclaimed albums, ‘Paper Tiger’ & ‘Can of Worms’ with his own groups on celebrated jazz indie label Whirlwind Recordings. His warm and expressive sax has also been heard however in a variety of other contexts, from contemporary showstoppers such as Melt Yourself Down and Yazz Ahmed to the Julian Argüelles' Septet. A BBC Radio 3 New Generation Artist, guitarist Rob Luft received a swathe of awards in recent years, including “Breakthrough Act” in the 2018 Jazz FM Awards, “Instrumentalist of the Year” in the 2018 Parliamentary Jazz Awards and “Instrumentalist of the Year” in the 2019 Jazz FM Awards.  A child prodigy, drummer Tim Giles won the Telegraph Young Composer of the Year award when he was 12.  Working with artists such as Stan Sulzmann and Iain Ballamy while still in his teens, he then went on to co-found the band Fraud with James Allsopp, who won the BBC Jazz Award for Innovation among many other honours. Melodic writing, ambient textures and interactive group improvisations augmented by the use of electronic effects will make this a unique night to remember.

“Rarely does a player so young debut with such a fully rounded tone and range of writing skills, so keep a keen ear out for Crowley: the future could yet be his.” Jazzwise; "[ George Crowley] …a fine young composer/player who knows where the music has been and where he’s headed with it." The Guardian; "[Rob Luft] …fizzing with vitality and stuffed full of quirky and original musical ideas” London Jazz News; “Luft’s style is a garden of heavenly delights” All About Jazz; "Cutting edge jazz drummer" Telegraph; “Giles's remorseless groove” The Guardian