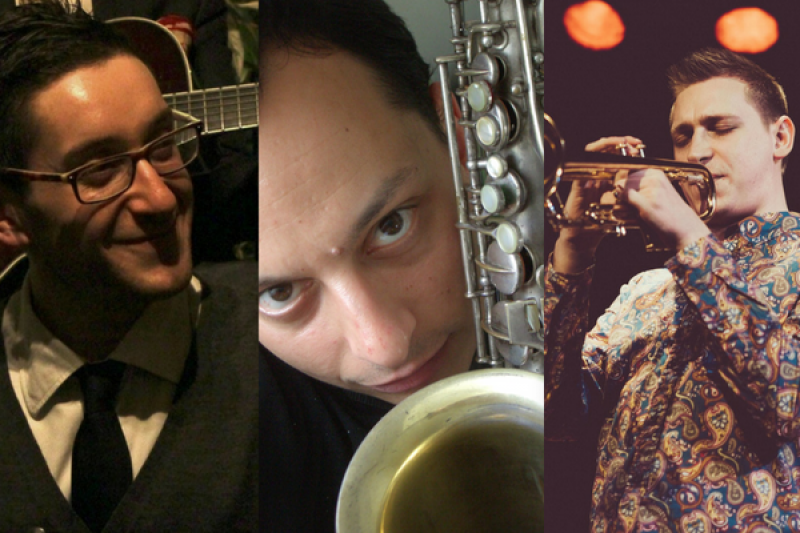 The theme of this evening is "Generations". At the 606, one of our remits is to create a space where young, talented, musicians have a place to play what they want and at the same time establish a relationship with the Club and the audience that is both long lasting and rewarding. The three jazz musicians (and their bands) featured tonight represent three generations of players, all of whom have made an impression on the UK scene (and beyond).

The Award winning trumpeter James Davison will start the evening off with his quartet. Just in his mid twenties James is already making a name for himself in the UK. Lead trumpet with the National Youth Jazz Orchestra for some years he recently completed his Masters in Jazz Performance at The Royal Academy of Music. He includes work with the likes of Royal Philharmonic Orchestra and Concert Orchestra, the Syd Lawrence Orchestra and Pete Long’s ‘Jazz at the Philharmonic’ band. His melodic, flowing, jazz playing can be heard regularly with the likes of the Misha Mullov-Abbado Group as well as his own jazz band, The Dixie Strollers. A fine young player and a great way to start the evening.

Saxophonist Alex Garnett will be appearing with his band, including Special Guest, flautist Gareth Lockrane for the second set. Alex and Gareth have been performing at the Club for more than 20 years now and are widely regarded as amongst the finest on their respective instruments in the International Jazz world. A “musician’s musician” Alex's powerful, flowing, hard bop sax style has been heard with some of Europe's leading bands, having performed in over 30 countries with artists including Sir John Dankworth, Wynton Marsalis, Peter King, Humphrey Lyttelton, Van Morrison and Jools Holland. Well established as both a performer and composer/arranger with his own Award Winning Big Band, it is a measure of Gareth Lockrane's international standing that he was named “Rising Star on Flute” in the prestigious Downbeat Critics Poll (USA). alexgarnettsax.com/ :: :: garethlockrane.com/

Giacomo Smith is an expat American clarinet and sax player who has taken London by storm in recent years with his 1930's/40's “Kansas Smitty's House Band”. A fluent and authentic clarinet player as well as an excellent modern jazz saxophonist, he will be appearing tonight with the "cut down" version of the KSHB, "Smitty's Big 4 + 1". Although all the players are also well known on the modern jazz scene they are extremely enthusiastic about playing this fun, good time music, which they do extremely well. kansassmittys.com/

The idea of the evening is that each of the bands will perform separately and then the featured musicians will all play together at the end of the night in a "Super Group" format, performing arrangements from the various members of the front line accompanied by Alex's rhythm section. Promises to be quite an occasion!

“Alex Garnett…one of Great Britain’s most accomplished post bop musicians” AllAboutJazz; “Lockrane’s flute work is exceptional, combining a relaxed fluidity with an acute adventurousness…...very special indeed” Jazzwise; “Bandleader clarinettist/sax Giacomo Smith, from the upper reaches of the Hudson in New York…[his] sound and presence are a welcome addition to the London scene…definitely a band to watch out for” LondonJazz News