GIVE A GIG WEEK: OLLIE HOWELL 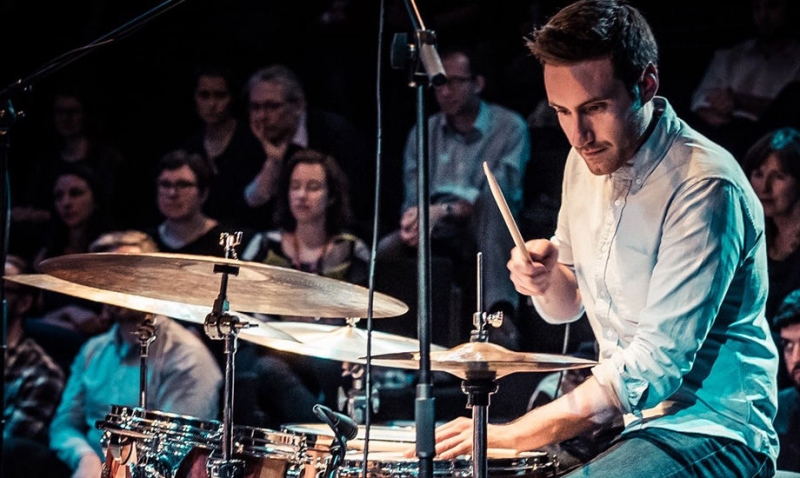 This evening we are partenring with the charity Youth Music to present the wonderful drummer, and old friend of the Club, Ollie Howell with his terrific quintet. Ollie is a multi-award winning drummer, composer and bandleader. Since graduating from the Royal Welsh College of Music and Drama in 2011 he has rapidly established himself as an impressive musician, not only performing with various UK and international players but also working regularly with his impressive quintet for which he composes as well as leads. It is a measure of Ollie’s talent that since 2009 he has been mentored by one of the international music scene’s most prestigious figures, Quincy Jones (Michael Jackson), who said of Ollie “He’s so creative I couldn’t believe it... [he] has what it takes to make a life out of music”. A recipient of the prestigious Peter Whittingham Development Award Ollie's critically acclaimed debut album , ‘Sutures and Stitches’ on Whirlwind records, went a considerable way to establish him as a performer and composer of stature on the UK jazz scene. The music that Ollie wrote for that album has a fascinating and unique history: in 2009 Ollie was diagnosed with a brain malformation called Arnold Chiari Type 2, which meant he had to have numerous neurosurgical operations spanning anumber of years. All of the music on that album, some of which was written from his hospital bed, as he says “was composed during and influenced by this incredible journey that I went through at this defining point in my life”.

Since that time, in 2014 he became the first jazz recipient of a Sky Academy Arts Scholarship (one of only 5 in the whole of the UK awarded that year) and in 2017 released his second, highly accalimed, album 'Self-Identity' on US label Ropeadope, with Jazz FM describing it as "One of the most hotly anticipated Jazz albums of the year". And if all that wasn't enough, the Sky Arts channel filmed a whole program around the making of that album, presented by Melvyn Bragg. Ollie describes the music being performed this evening as "a mixture of music from “Self-Identity”, some from our debut, and some new material as well". Joining Ollie tonight will be some of the most talented of the new generation of UK musicians, Duncan Eagles-sax, Tom Millar-piano and Max Luthert-bass. Ollie is an Ambassador for Youth Music, a national charity that every year provides life-changing music-making opportunities for over 75,000 young people who face difficult challenges in their lives such as living with disability, poverty or mental health issues.  Young people attend regular workshops in singing, songwriting, instrument learning, performance and music production.  All the proceeds from ticket sales for this show will be donated to Youth Music as part of its Give a Gig Week, when it aims to have 100 fundraising gigs staged in support of its work. So do come down, hear some great music and support a worthwhile cause...al at the same time! “clever postbop compositions…[showing] idiomatic versatility…highlighting...Howell's melodic talents” Guardian; “Impressive” Financial Times