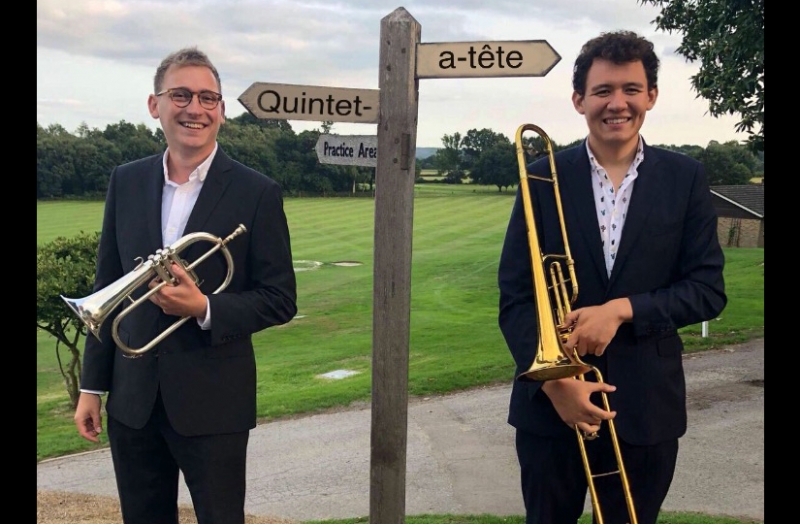 This new quintet, delightfully named Quintet-a-Tete, is led by two highly regarded young jazz musicians, trumpeter James Davison and trombonist Callum Au. Inspired by the highly regarded US outfit from the 1960's, the Clark Terry/Bob Brookmeyer Quintet, this new band splits their programme about equally between Terry/Brookmeyer material and compositions by Callum and James themselves. The emphasis is on fun, swinging, music bringing the atmosphere and vibe of 50’s and 60’s jazz to life for the modern day. Recipient of the Smith-Watkins Trumpet Award (2016) and the current Worshipful Company of Musicians Young Jazz Musician of the Year (2018) trumpeter James Davison was lead trumpet with the National Youth Jazz Orchestra and includes work with the likes of Royal Philharmonic Orchestras and Pete Long’s ‘Jazz at the Philharmonic’ band, as well as his own jazz group, the Dixie Strollers. Callum Au is in demand both as an arranger and for his considerable skills as a trombonist. He has built a stellar reputation on both fronts, performing with artists such as Joss Stone, Tim Minchin and Peter Erskine and writing arrangements for the likes of the BBC Big Band, Jamie Cullum and Clare Teal as well as his own eponymously named Big Band. Tonight’s quintet is completed by the excellent rhythm section of Sam Watts-piano, Misha Mullov-Abbado-bass and Sebastiaan De Krom-drums.