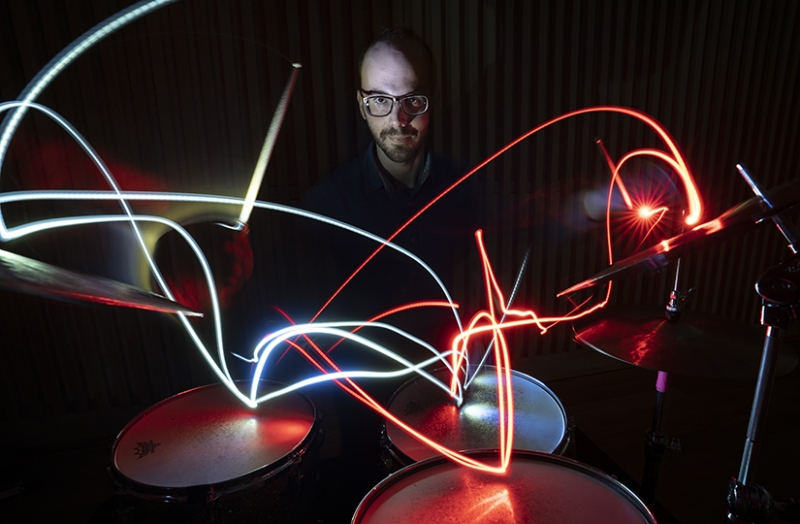 “Juhasz…whether working out with sticks, brushes or just hands…left the listeners awestruck”

Marton Juhacz is a highly accomplished, multi Award winning drummer, composer and bandleader who will be leading this impressive International quartet tonight. He studied extensively in his native Hungary, winning the national first prize for solo percussion in 2005 before relocating to study in London. After being awarded the prize for top overall student on his course, in 2007 he was accepted to Berklee College, in Boston. Since graduating from Berklee in 2012 Marton, who was also the recipient of the Foundation for Hungarian Percussion Culture's "Golden Drumstick" Award, has performed and recorded extensively both in the US, the UK and Hungary. In 2014 and 2015 he was voted ‘Drummer of the Year’ on the JazzMa online readers’ poll, in 2017 the album ‘Pannon Blue’ won ‘Best Hungarian Jazz Album’ in the Gramofon Awards and in 2018 the Alan Benzie Trio’s album ‘Little Mysteries’, on which he was also featured, won the ‘Best Album’ prize at the Scottish Jazz Awards. You get the idea, he’s very good! Also featured in this truly International group will be the multi Award winning Polish guitarist Szymon Mika, the upcoming Argentinian jazz trumpeter Sergio Wagner and US born bass player and highly regarded educationalist Danny Ziemann. The four musicians met as part of the very first Focusyear program in Basel 2017-18 and are all featured on Marton's extremely well received 2019 Album “Discovery” The music this evening will be primarily originals and arrangements by Marton from that album and promises to be something quite special.

“Juhasz…whether working out with sticks, brushes or just hands…left the listeners awestruck” Bebop Spoken Here; “Juhasz…is also a composer and bandleader of…accomplishment…inspired writing, to which the band responds with skill and passion” Steve Swallow