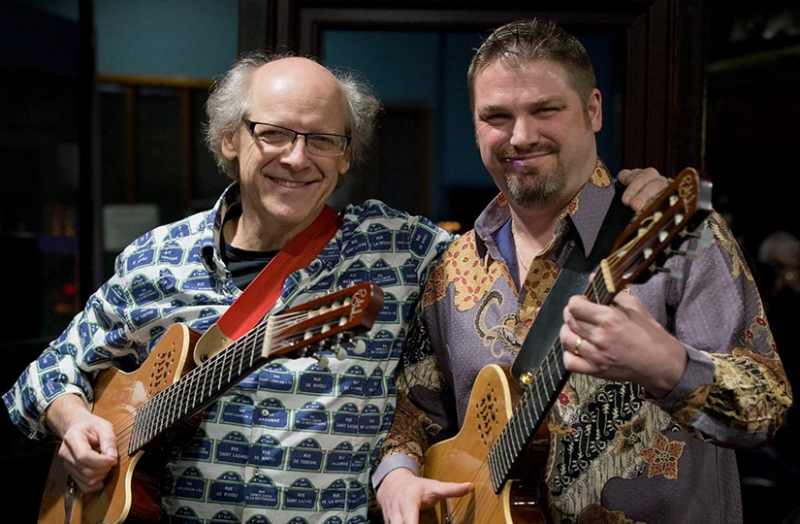 Tonight sees the pairing of two of the finest, and most striking, jazz guitarists in the UK, Nicolas Meier and Pete Oxley. Mixing jazz, heavy metal, Turkish-influenced music, Flamenco and Tango Nic Meier is an established star on the British jazz scene. A recipient of numerous awards he earned a scholarship to Boston's illustrious Berklee College of Music before settling on London as the perfect destination for combining the energy of the US with a happening European music scene. His versatility and musical fluency drew the attention of guitar legends Steve Vai, who signed him to his record label, and Jeff Beck who for two world tours during the last several years has made Nicolas a mainstay of The Jeff Beck Group. Born in 1973 in Switzerland, Nicolas has embraced a number of different cultures and studied their music forms, nuances and idiosyncrasies and is one of those unusual musicians equally at home playing both rock and jazz. To date, he has produced ten albums as a solo artist. Pete Oxley moved to Paris in the late 80’s, where he established himself as a versatile guitarist. Through the 90’s he toured throughout mainland Europe as well as making regular visits back to the UK before finally relocating back to England in the late 90’s. It wasn’t long before his melodic and fluent playing was being sought after and in 1999 he became involved with a new contemporary jazz club in Oxford, The Spin, which has over the years established itself as an Award winning and much respected venue. In 2003 he formed a touring and recording band, Curious Paradise, which over the years has featured an impressive list of high profile UK based jazz musicians and Pete has also performed regularly with Argentine guitarist Luis D’Agostino, with whom he has toured and recorded. Tonight Nic and Pete bring their fantastic quartet to the Club featuring Canadian bassist Kerry Galloway and Paul Cavaciuti on drums plus an impressive array of guitars and similar stringed instruments, performing their own, highly impressive, originals with the occasional jazz standard added to the mix. Nic and Pete have produced 3 albums together and have been playing in this quartet format for a while now, so the interplay between these two highly skilled and creative musicians is something very special.

"when it comes to empathy this duet of guitar virtuosi comes close to perfection" Guardian; "A fascinating fusion opulent with evocative splendour" MOJO,  ★★★★; "Oxley and Meier, two outstanding players...a worthy addition to the guitar duo Hall of Fame." Bebop Spoken Here; “Here’s a fret fest that shouldn’t be allowed to slip under the radar.” Jazzwise