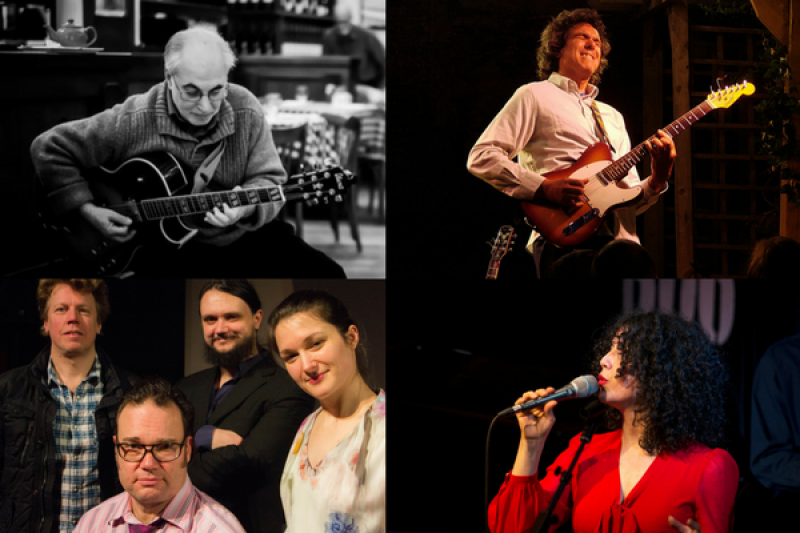 It's always nice to start these events with someone who have been associated with the Club since the very beginning, and in this case it's the guitarist Peter Rubie. Resident in the US since the early 1980's Peter was one of the very first musicians to play at the old Club under my watch back in 1976, and has been a regular here off and on ever since. A modern jazz guitarist in the classic "Philly guitars" style it's a pleasure having him kick things off in the company of the Gareth Williams trio. Following Peter is another guitarist who has been performing at the Club in various guises for more than two decades, John Etheridge. An iconic figure on the UK jazz scene, John first came to prominence in the mid 70’s with the classic fusion band “Soft Machine”, with whom he still regularly works and tours. During the same time - demonstrating his remarkable and now well-documented versatility - he also spent a number of years with the celebrated swing jazz violinist Stéphane Grappelli and for the last 12 years or so has been working in various formats (mostly duo) with the celebrated classical guitarist John Williams. Tonight John will be featuring the format that he works most often with here at the Club, his organ trio, which features Pete Whittaker on organ and George Double on drums. And just to add some spice to the evening John will be joined by a singer who has made quite an impact at the Club in the relatively short time that she has been with us, the ex pat Australian Lily Dior. Lily is the most recent in a long line of remarkable Aussie singers who have made their names at the Club over the years, including Naomi Eyers, Victoria Newton, Trudy Kerr, Anita Wardell and Nina Ferro. In the great tradition of the 606 Club this will be the first time that these two have actually worked together and it promises to be quite a set. And the group ending up this first evening highlights something else we like to do here at the Club, which is to encourage and support intergenerational bands. The Glow Quartet features two wonderful musicians, pianist Gareth Williams and the equally impressive, multi-award winning saxophonist and composer Trish Clowes. Over the last 25 years or so Gareth has unquestionably established himself as one of the country’s leading modern jazz pianists. A fiery and creative player, his remarkable talent has been heard with an impressive array of world-class artists, from Jazz/Hip Hop band “Us3” through to internationally-renowned jazz musicians such as Jerry Bergonzi, Joe Lovano, George Coleman and Jim Mullen. MD for iconic UK vocalist Claire Martin, Gareth has been featured at the Club on many occasions. In just a few short years Trish has made quite an impact on the UK jazz scene. In 2008 she won the Peter Whittingham Development Award, a BBC Radio 3 New Generation Artist her ‘Iris Nonet’ was short-listed for the 2013 BASCA British Composer Awards and her first BBC commission “The Fox the Parakeet & The Chestnut” won the BASCA Award in 2015. Her latest album, ‘My Iris’, has been described as “masterful musical wizardry” (All About Jazz). As Gareth describes the band: “…it’s an interactive band, taking risks, taking the good stuff from both more traditional improvised music and contemporary ideas”. Also featured with the quartet will be the exceptional rhythm section of Calum Gourlay-bass and Martin France-drums.