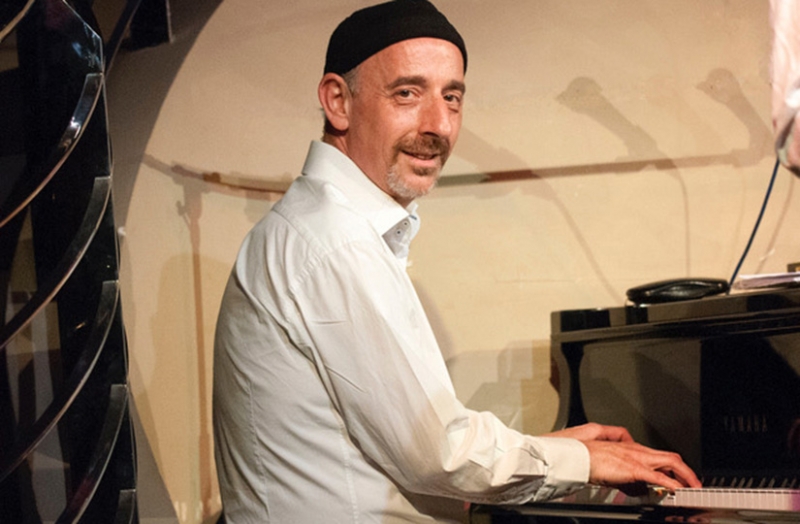 Joining us tonight to celebrate 60 years on the planet will be Roland Perrin, composer, pianist and educator. As a performer he has appeared with a diverse array of leading jazz and World music artists and his compositions range from solo piano works to full orchestral pieces. His many compositions include the full length opera for choir and jazz band "Lansky", which was received with significant acclaim, and the 300 strong choral, jazz/Brazilian tour de force "Rio Amazonas", which had its Barbican premiere in 2018. Roland sees his music as taking some of the best elements from different traditions, developing and unfolding them like a story and, as he says, "leaving space for the music to dance". In addition to his writing he is also a teacher of some renown, being Head of Piano Studies at London Centre of Creative Media and he has developed a unique jazz piano teaching method that he will soon be publishing in book format and online. His performance credentials are just as impressive, with work in his own Afro-Klezmer band "Judessa Jazz" as well as with his band Blue Planet Orchestra, the seven-piece incarnation of which he will be presenting this evening. The music for tonight's programme will be a mix of his classic material from the 90's and 00's, through to his current repertoire plus material he has written especially for this show, hence the title. It will be performed by a hand picked selection of musicians he has worked with over the years, including Stuart Brooks-trumpet, Paul Taylor-trombone, Sue Mackenzie & John O'Neill-saxes, Serge Ngando-bass and Paul Cavaciuti-drums. And expect some Special Guests to help with the Birthday celebrations, including singers Rachel Sutton, SiiLhouette plus many more…As Roland says "File under Jazz-World-Afro-Latin-Klez!"