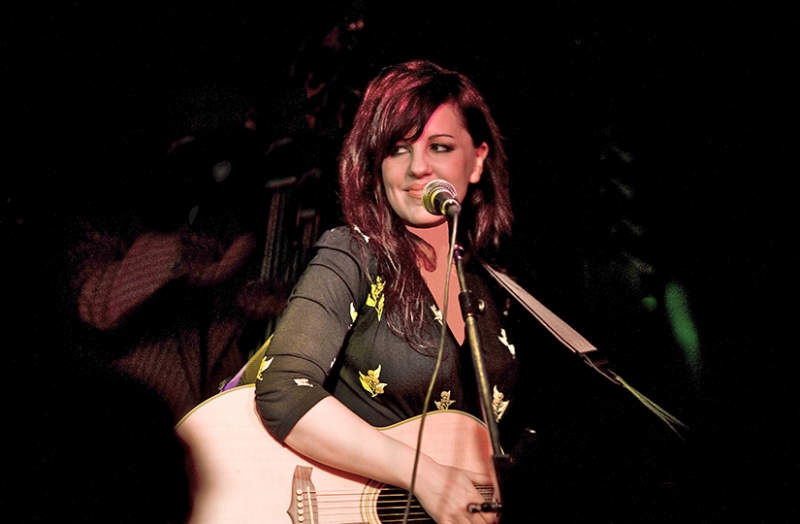 Anglo-American songstress Sarah Gillespie is renowned for mixing elements of jazz, folk & Americana with her streetwise poetic lyrics. Having released 4 critically acclaimed albums in the last 10 years, she has toured extensively, performing at leading venues (Ronnie Scott's - London, Blue Note - Milan, CBGB's New York) plus festivals in Europe (Ibiza Jazz Festival, Hay Festival of Literature & Arts, Lahr singer-songwriter Festival, Germany) and the USA. She has twice played live on BBC 'Woman's Hour' to 10 million listeners & was interviewed by Andrew Marr on 'Start the Week' on the role of politics in the Arts (she has a Master's Degree in Politics & Philosophy). Gillespie's most recent album 'Wishbones' (2019), produced by Mercury Prize nominated composer Kit Downes, was launched at London's Southbank Centre and received 5 star reviews & Album of the Year from the Arts Desk. In addition to Sarah on guitar and vocals, she will be accompanied by her excellent band: Chris Montague-guitar, Tom Cawley-piano, Conor Chaplin-bass & James Maddren-drums. To add even more sparkle to this evening's performance, Sarah has invited two special guests to perform a song or two: the excellent Fini Bearman (the first professor of songwriting at the prestigious Guildhall School of Music and Drama!) and promising young newcomer Jess Bettesworth.

"Haunting tunes and striking lyrics…yearningly pretty and bittersweet" The Independent ★★★★★; "Joni Mitchell with a little rap-like percussiveness thrown in, Gillespie is an original" The Guardian ★★★★;  "Like Dylan on amphetamines" The Financial Times ★★★★; "Beat poet adventurer strays beyond the boundaries of singer-songwriter" MOJO ★★★★; "Alive with her characteristic wit, savvy and sensitivity'. Album of the Year." The Arts Desk ★★★★★; ".. (Fini) has an irresistible voice... She is an expressive singer, and an intriguing composer and lyricist" allaboutjazz.com