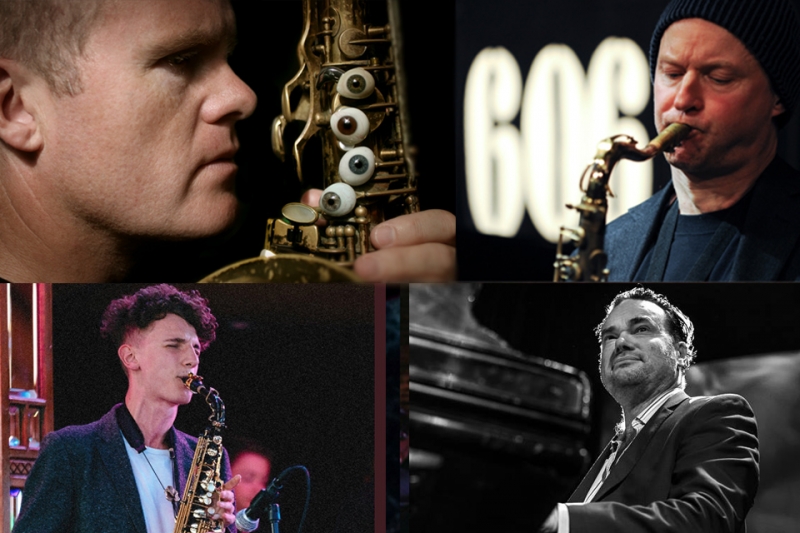 This remarkable gig features a breathtaking 4-sax front line supported by Gareth Williams's exceptional piano trio. Showcasing the talents of four outstanding jazz saxophonists, each with a unique sound and approach, the evening celebrates one of jazz music’s essential instruments. One of the UK’s leading tenor sax players Mornington Lockett is a former member of the Ronnie Scott quintet, has worked with singer Sarah Jane Morris and the Tracey’s - Stan and Clark - and was the driving force behind the brilliant “Celebrating the Jazz Couriers” quintet. He can regularly be seen here at the Club in the company of the UK alto sax giant Peter King (who we are hoping may just manage to make it down for a “Special Guest” appearance). The multi-award winning Iain Ballamy is widely considered to be one of the UK's finest and most innovative saxophonists with a cv that reads like a who’s who of jazz, including the likes of “Loose Tubes”, Bill Bruford,  Hermeto Pascoal, Gil Evans and Django Bates. An established artist of International stature, over the last 35 years he has appeared at innumerable festivals and venues worldwide and can be heard on over 60 CDs.  And the third of our featured saxophonists is the first ever winner of the “BBC Young Musician - Jazz” Award in 2014 and the 2016 British Jazz Award “Rising Star”, saxophonist, composer, arranger and producer Alexander Bone. A bold and impressive talent, Alexander has already performed twice as a soloist on the BBC Proms, was part of the BBC Young Musician 40th Anniversary celebrations at Royal Albert Hall and has worked with some of the biggest names in jazz, pop and electronic music including Nile Rodgers and Gary Barlow. Pianist Gareth Williams has unquestionably established himself as one of the country’s leading modern jazz pianists, working with Claire Martin, Jerry Bergonzi, Joe Lovano and many more. And watch out, as mentioned above, for our very special “Special Guest”.

“Lockett…plays with tremendous fluency and drive” Evening Standard; “Ballamy..leaves you in absolute awe…sheer virtuosity and sense of joy” BBC; "Alexander Bone...no mistake, this young man can play. How he does it is beyond mere mortals” BeBop Spoken Here; “Williams…fantastic improviser” The Guardian