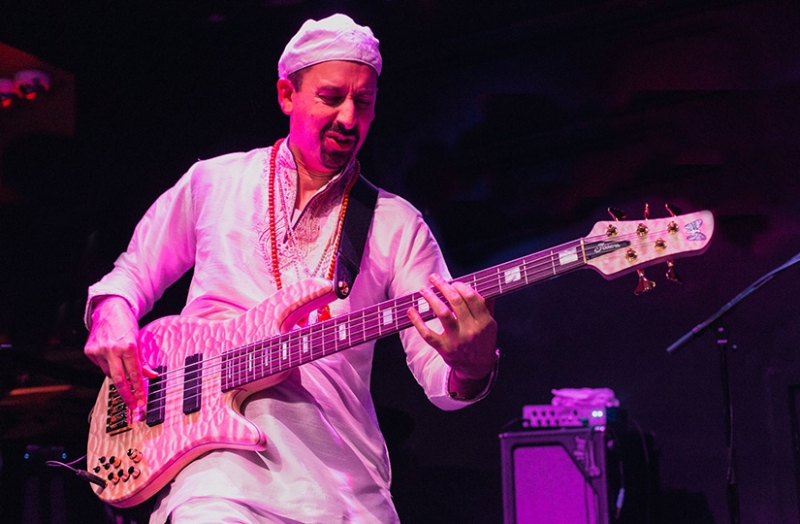 Shez Raja is a seriously talented electric bassist whose work in a fascinating mix of Indo-jazz, funk and groove styles has propelled him to the forefront of the UK jazz scene, drawing comparisons to electric bass legend Jaco Pastorius. Educated at Leeds College of Music, Shez played with groups such as Elephant Talk and Loka, before becoming a highly sought-after session musician, touring with platinum selling hip-hop artist MC Lyte. The last three years alone have seen the release of his critically-acclaimed album ‘Gurutopia’, featuring global jazz stars Mike Stern and Randy Brecker, an ‘Inside The Mind’ feature on BBC Radio 3, performances at the EFG London Jazz Festival and playing to a 800 capacity crowd at Islington Assembly Hall. Shez’ latest album, “Journey to Shambala”, released in May is “a musical voyage of soundscapes from exhilarating Indojazzfunk to enchanting ballads”, and features his standout band, Polish folk-jazz singer Monika Lidke, saxophonist Vasilis Xenopoulos, violinist Pascal Roggen, keyboardist Alex Stanford and drummer Chris Nickolls. Adding even more intensity and spark to this 606 gig will be Shez’s Special Guest, John Etheridge, who first took the UK jazz scene by storm in the 1970’s with the iconic band Soft Machine and whose work with the likes of Stephane Grappelli, Dizzy Gillespie, Tony Williams, Pat Metheny and John Williams has led to his being considered one of the UK's finest guitarists. Shez says: "Expect exciting music that’s full of surprises – a sonic kaleidoscope of euphoric jazz, thundering funk, tuneful ragas and intoxicating grooves!" Hmm, that sounds like something you will not want to miss.

"Chic, contemporary and groove-laden" The Musician; “The hip-shaking mix of Eastern song lines and funky Western dance-beats never wavers” **** Evening Standard; “If the Mahavishnu Orchestra were reformed with a reincarnated Jaco Pastorius in charge it would sound pretty similar” The Guardian; “Shez Raja personifies the modernisation of jazz. He is fearless as a musician.” All About Jazz ★★★★;“One of the best guitarists in the world” Pat Metheny