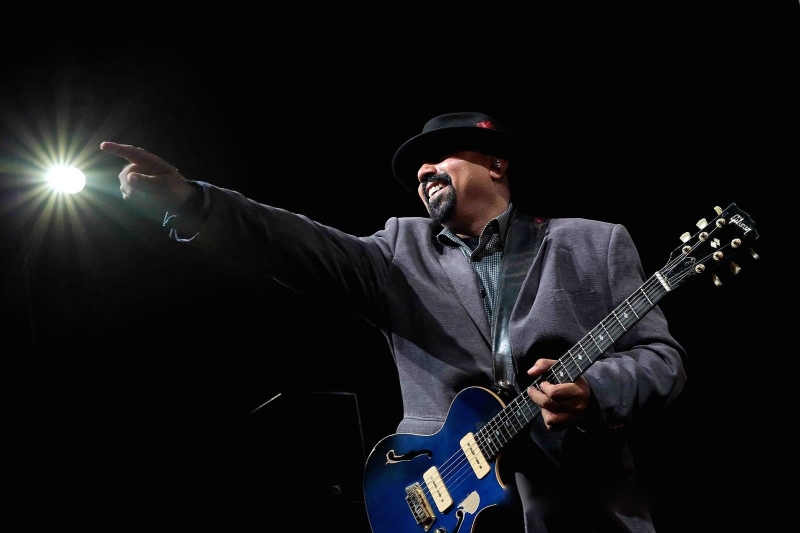 “Down and Dirty, from the-gut-blues”

The youngest son of the iconic blues master Lonnie Brooks the multi Award-winning Wayne Baker Brooks was literally born into the blues. Raised in Chicago, considered by many to be the home of urban blues, he started touring with his father in 1990 at the age of 20 and by 1997 was leading the band. Since that time his powerful vocals and fluent, impressive, guitar playing, often described as “liquid fire”, have been heard with a vast array of International Blues, pop and rock artists including, amongst many others, Buddy Guy, Bo Diddley, The Black Crowes, Otis Rush, Susan Tedeschi, Taj Mahal, Mick Fleetwood, and Bobby Rush. His many accolades and achievements include being inducted in to the Chicago Blues Hall of Fame and performing at Bill Clinton’s second Inauguration and he toured extensively with his father’s band for more than 20 years, both as the Lonnie Brooks band and as the Brooks Family band (with his brother, guitarist/singer Ronnie Baker Brooks). However, it is as a band leader in his own right that he is best known on the International Blues scene these days, touring the World with a live show that draws on his rich blues heritage and at the same time effortlessly expands the boundaries of the genre. Joining Wayne on the bandstand this evening will be a truly all-star line-up of leading UK blues man Todd Sharpville-guitar, Dave Swift (Jools Holland, Paul McCartney, George Benson)-bass and Steve Rushton (Imelda May, Jeff Beck)-drums.

"A Must See" Chicago SunTimes; “Brooks…a fully formed new [musical] vision that updates the sound of the blues without falling into the same tired blues-rock clichés” AllMusic; "a maverick whose distinct brand of blues incorporates elements of rock, R&B, funk, and even a trace of hip-hop"  Blues Revue Magazine